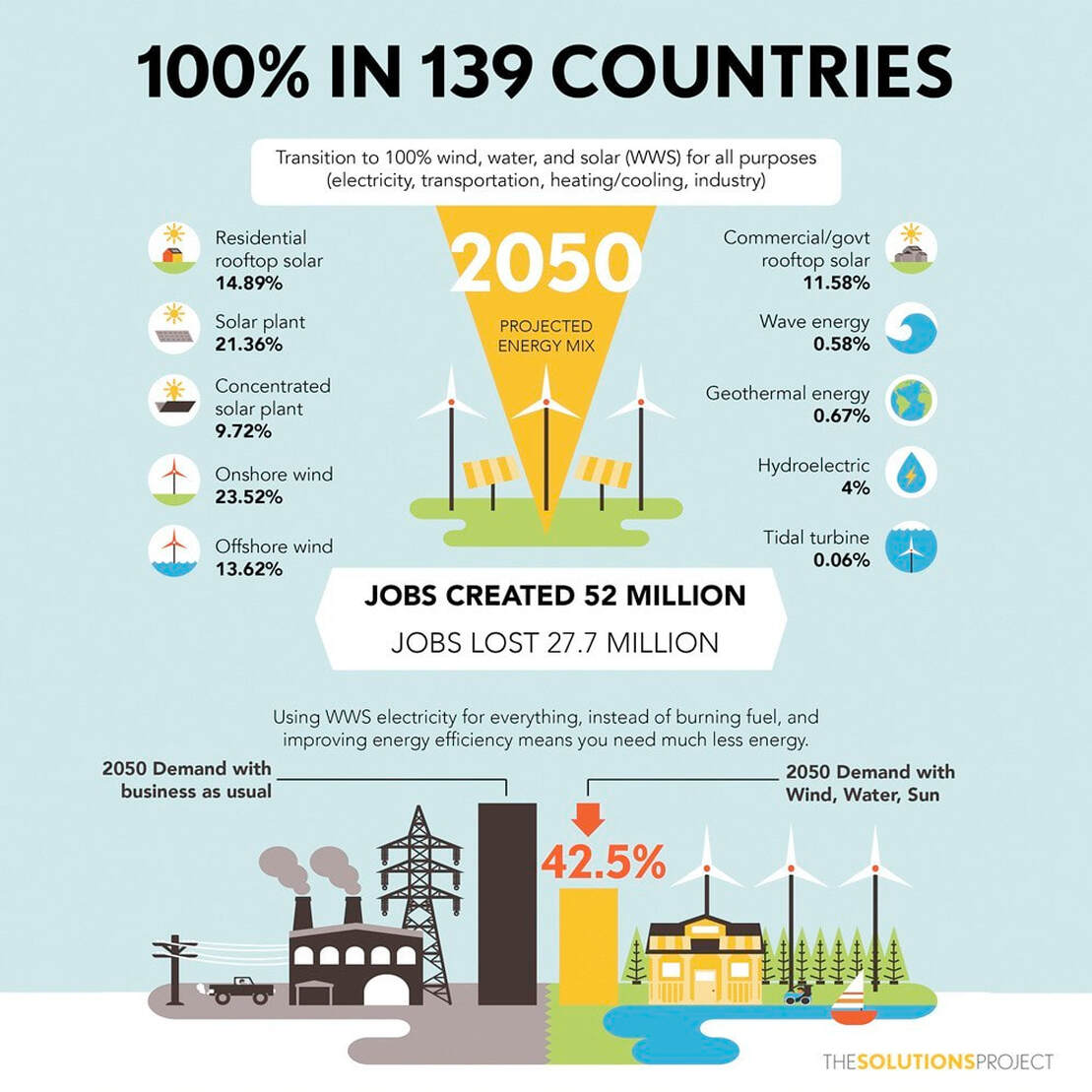 "100% Clean and Renewable Wind, Water, and Sunlight All-Sector Energy Roadmaps for 139 Countries of the World"

SUMMARY
We develop roadmaps to transform the all-purpose energy infrastructures (electricity, transportation, heating/ cooling, industry, agriculture/ forestry/ fishing) of 139 countries to ones powered by wind, water, and sunlight (WWS). The roadmaps envision 80% conversion by 2030 and 100% by 2050. WWS not only replaces business-as-usual (BAU) power, but also reduces it $42.5% because the work: energy ratio of WWS electricity exceeds that of combustion (23.0%), WWS requires no mining, transporting, or processing of fuels (12.6%), and WWS end-use efficiency is assumed to exceed that of BAU (6.9%). Convert- ing may create $24.3 million more permanent, full-time jobs than jobs lost. It may avoid $4.6 million/year premature air-pollution deaths today and $3.5 million/year in 2050; $$22.8 trillion/year (12.7 ¢/kWh-BAU-all-energy) in 2050 air-pollution costs; and $$28.5 trillion/year (15.8 ¢/kWh-BAU-all-energy) in 2050 climate costs. Transitioning should also stabilize energy prices because fuel costs are zero, reduce power disruption and increase access to energy by decentralizing power, and avoid 1.5C global warming.​
INTRODUCTION
The seriousness of air-pollution, climate, and energy-security problems worldwide requires a massive, virtually immediate transformation of the world’s energy infra- structure to 100% clean, renewable energy producing zero emissions. For example, each year, 4–7 million people die prematurely and hundreds of millions more become ill from air pollution,1,2 causing a massive amount of pain and suffering that can nearly be eliminated by a zero-emission energy system. Simi- larly, avoiding 1.5C warming since preindustrial times requires no less than an 80% conversion of the energy infrastructure to zero-emitting energy by 2030 and 100% by 2050 (Timeline and Section S10.2). Lastly, as fossil-fuel supplies dwindle and their prices rise, economic, social, and political instability may ensue unless a replacement energy infrastructure is developed well ahead of time.
​
As a response to these concerns, this study provides roadmaps for 139 countries for which raw energy data are available.3 The roadmaps describe a future where all energy sectors are electrified or use heat directly with existing technology, energy demand is lower due to several factors, and the electricity is generated with 100% wind, water, and sunlight (WWS). The roadmaps are not a prediction of what might happen. They are one proposal for an end-state mix of WWS generators by country and a timeline to get there that we believe can largely solve the world’s climate-change, air-pollution, and energy-security problems. However, the mixes we propose are not unique, because many combinations of WWS generators can result in stable, low-cost systems of energy production, distribution, storage, and use.4

Previous studies have established that it may be technically and economically feasible to transition the world as a whole5,6 and the 50 US states7 to 100% WWS for all purposes, and that the main barriers are social and political. Other studies (e.g., for the UK,8 Europe and North Africa,9 Australia,10,11 Europe,12,13 Great Britain,14 Hungary,15 Ireland,16 UK,17 Denmark,18 France,19 several world regions,20 and 16 countries21) have looked at similar issues, but for individual countries or regions, selected sectors, partial carbon emission reductions, or carbon emission reductions only rather than air pollutant as well as carbon emission reductions. This study uses a unified methodology (Methods and Supplemental Information) to examine the question of whether it is economically possible, with mainly existing technologies and only a few developing technologies, to transition 139 countries to 100% WWS in all energy sectors, thereby eliminating the maximum possible air pollution and greenhouse-gas emissions in those countries.

More specifically, we estimate 2050 annually averaged power demand for 139 countries before and after all energy sectors have been electrified. We then perform a renewable resource analysis with multiple datasets in each country and use it to help determine one of many possible mixes of clean, renewable generators that can satisfy the annual demand. The generators are almost all commercially available solar, wind, hydropower, and geothermal technologies, except that we assume that two technologies not yet widely used, tidal and wave power, are installed in small amounts in a few countries. Similarly, most of the electric technologies that we propose for replacing fossil-fuel technologies are already commercial on a large scale today (e.g., electric heat pumps for air and water heating, induction cooktops, electric passenger vehicles, electric induction furnaces, electric arc furnaces, dielectric heaters), but a few are still being designed for commercial use (e.g., electric aircraft and hybrid hydrogen fuel cell-electric aircraft). We then draw on a previous analysis to estimate the additional energy-storage capacity needed for balancing time-dependent supply and demand during a year. The present study does not examine grid stability, since it is evaluated in separate work (see Matching Electric Power Supply with Demand and Section S7). Finally, we estimate the land and ocean foot-print and spacing areas required for the WWS scenario plus the energy costs, air pollution damage costs, climate costs, and job creation/loss for the WWS versus BAU scenarios. With this information, we evaluate whether each country can technically (with the country’s available renewable resources and with existing plus developing technologies) and economically meet annual average power demand while providing environmental benefits and jobs.

In summary, each 100% WWS roadmap developed here provides an example of what a 2050, 100% WWS versus BAU all-sector energy infrastructure can look like in terms of: While some suggest that energy options aside from WWS, such as nuclear power, coal with carbon capture and sequestration (coal-CCS), biofuels, and bioenergy, can play major roles in solving these problems, all four of those technologies may represent opportunity costs in terms of carbon and health-affecting air-pollution emissions.

Moreover, the Intergovernmental Panel on Climate Change (IPCC,24 p. 517) concludes that there is ‘‘robust evidence’’ and ‘‘high agreement’’ that ‘‘Barriers to and risks associated with an increasing use of nuclear energy include operational risks and the associated safety concerns, uranium mining risks, financial and regulatory risks, unresolved waste management issues, nuclear weapons proliferation concerns, and adverse public opinion.’’ As such, expanding the use of nuclear to countries where it does not exist may increase weapons proliferation and meltdown risks. More advanced nuclear cannot be evaluated fully until it is commercialized but will likely have some if not several of the issues associated with current nuclear, including waste storage and disposal, accident risks, and weapons proliferation risks. There is no known way at this time to eliminate these risks. By contrast, WWS technologies have none of these risks. Thus, we are proposing and evaluating a system that we believe provides the greatest environmental benefits with the least risk.

Even though tidal and wave power are not widely used, they have been used for power generation in the open ocean for years, have been evaluated to be clean and to present no health risk to humans, and produce power with less time variation than offshore wind so would complement the other resources proposed here if they can be scaled up. Similarly, electric and hydrogen fuel cell hybrid commercial aircraft technologies already exist in small prototypes and in passenger cars, and we do not propose their full development until 2035–2040, whereas we need clean electric power resources starting today. In summary, we focus on WWS technologies, which at least appear possible to solve critical environmental problems in a timely manner. Whether the roadmaps are implemented rapidly, however, depends on social and political factors.”